In our first interview with Darin Andrew, Senior PKI Architect at DigiCert, we learned to keep the next 5–10 years in mind when making decisions about PKI architecture. We even learned about three ways top enterprises are using PKI to enhance cybersecurity.

Now, we ask Darin about the difference between public and private PKI, which is best for different use cases, and how some of the top enterprises have built PKIs that scale successfully. We start from square one—discussing the purpose of a root certificate.

Public Key Infrastructure (PKI) is binding an identity to the public key through a signing process.

That signature is performed by a root (or with an intermediate that chains up to the root). That’s how you identify if a certificate is valid, and whether you want to trust it.

The technology used for signing a certificate is the same whether signing with a private or public root. We’re not changing the cryptography or the signature. We’re simply saying that a publicly trusted root is already distributed out to browsers, operating systems, phones, etc. Browsers, like Chrome and Firefox, have root stores where they keep a list of the roots they trust.

A private root differs from a public root because private roots aren’t already distributed to the trust stores of major browsers and operating systems. A private root is created by a company or a CA, and won’t be included in the list Google and Mozilla have in their browser trust stores.

Because the technology behind public and private roots is the same—the certificate looks the same and the same signature hash algorithm can be used to sign the certificate—the next question would be, when do you use a private root versus a public root?

When should you use a public root versus a private root?

A private root is useful for internal operations. However, when you’re talking about a public-facing web page, you need a certificate issued from a public root.

Think about your website. When users visit your site, does their browser possess the root? With a private root, the answer depends on whether it’s being accessed from a computer the organization manages or not.

But what happens if this is a public web page that anyone in the world can hit? Unless you’ve distributed your private root to every single device that’s used to visit the page (which isn’t possible), users will receive a warning message saying the root that issued the certificate isn’t trusted.

Browsers are giving severe warning messages these days. Either the users won’t be able to visit the page, or they’ll be forced to change their settings to make the connection. That’s not a good place to be in.

How would the private/public root scenario influence something like email signing?

If you’re sending email to someone within your own company, you sign your email using a certificate issued from the private root—that works. The recipient checks the signature, sees it was issued by the private root that’s already on their computer, and they say, “That certificate is valid.”

But, what happens when you send that email to someone from another organization that doesn’t have your private root? They’ll see a message that says the signature is not valid.

This automatically happens in Outlook, for example. Outlook checks to see if the root that issued the certificate is in the root store of the operating system. When it sees that it’s not, Outlook displays a message saying that the signature is not valid.

Using a private root for email doesn’t make much sense. The reason you sign email is to assure the person on the other end that they can trust that the message was sent from you and wasn’t altered.

But, when you send email to another organization (which is the nature of email), if you’re using a private root, this results in an untrusted message. You’ve now destroyed the purpose for signing the email. This is an instance where you need publicly trusted certificates issued from a public root.

In short, a private root will help you secure internal operations. But when you’re sharing information with entities outside your organization—like signing an email—you need a public root that’s distributed to browsers and operating systems.

So, in what scenarios would a private root be useful?

Do most enterprises have a public or private PKI?

Let’s say I’ve decided to set up a hybrid PKI solution—what’s next?

Next, you’ll want to decide whether you use a hosted solution for your private PKI, or build your own internal CA.

Often, people think public PKI is hosted and private PKI is not hosted—this isn’t the case. Public and private PKI can both be hosted. The question is whether you have an internal CA or use a hosted CA for your private PKI.

In our next interview with Darin, we’ll dive into the considerations of whether to use a hosted or internal CA solution.

For now, here are your takeaways for making decisions between public and private PKI: 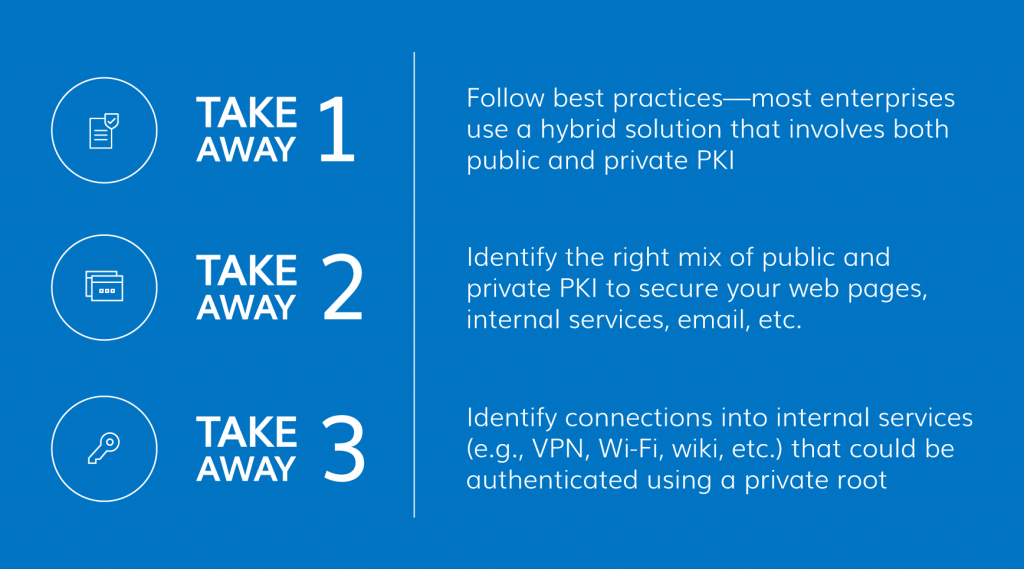 How to Build a PKI That Scales: Public vs. Private [SME Interview] was last modified: October 10th, 2017 by Darin Andrew