NCSAM Tip of the Week: Look for SHA-1 Browser Warnings

It's October, which means that it's time for National Cyber Security Awareness Month (NCSAM) again! To do our part and help promote cyber security awareness, DigiCert will be posting security tips every day as well as a blog post once a week in coordination with that week's theme. To see our daily security tips, follow us on Facebook, Google+, and Twitter.

This week’s theme for the NCSAM is “Stop. Think. Connect.” In a busy, click-happy world people tend to ignore popups and warnings in favor of getting where they want to go. This might be okay if you’re ignoring yet another annoying ad. However, this becomes a problem when people get so used to closing messages that they ignore legitimate security warnings.

However, this is not a warning message that users should ignore. Network security experts have warned that SSL Certificates using the SHA-1 hashing algorithm are in danger of being hacked due to advancements in computing technology and a research team from China identified a collision-resistance property weakness in SHA-1 in 2005. Because of these security concerns, the industry has been shifting toward SHA-2 over the last few years. However, with the sophistication of attacks and available computing power advancing rapidly, sites should be moving to SHA-2 as quickly as possible.

So, when you're going to a website and you stop to think, be sure to look for these SHA-1 security warnings in addition to other warning messages in your browser before connecting.

Google Chrome will begin showing security warnings for all future versions, starting with version 39. The warning that is shown depends on the expiration of the certificate.

Mozilla is adding a security warning to the developer Web Console in early 2015 for all SHA-1 certificates. This warning will be more prominent if the SHA-1 certificate expires after January 1, 2017. 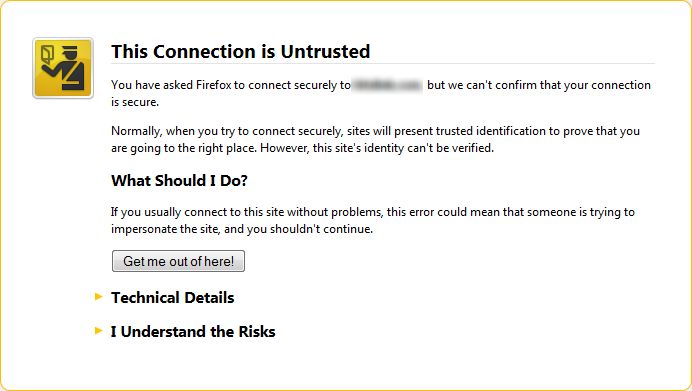 A Word to Admins

With the rising awareness of the need to be safe online, users are becoming more cautious about the sites they visit and where they enter their information. Technical and even not-so-technical users are put off by and sometimes don't come back to sites with security warnings. To avoid damage to your website and brand, we recommend switching over to SHA-2 as soon as possible.